Due to work schedules and not wanting to go on holiday during the main season when everyone else is on holiday too, we decided to have our summer holiday early this year: 29 – 14 july to be precise. We didn’t have to think long about the destination, as we had a splendid time on the Algarve last year, so we just went all boring and booked two weeks at the Jah-Shaka surf villa again.

The villa is still as pretty and relaxed as last year, although they have expanded a fair bit (5 surf instructors now whereas they only had 2 last year), but it’s still got the same vibe. We arrived late in the afternoon on Sunday (right on time to watch the Dutch team win one of their games) and in the evening, we enjoyed the villa dinner cooked by their in-house chef. Most of the week, we surfed at Praia da Bordeira. Paul really got the hang of it, and on Friday he paddled out to the back with me (which was on a quiet day at Vale Figueras) and caught his first green wave!

We also surfed a bit at Tonel (though because of last year’s storms there was hardly a beach left so this was only an option at low tide and with swell big enough to come around the bend or south swell which you don’t really get in summer). There were also lots of sightseeing options, for example during the sunrise paddle board trip. I’m really not a morning person, but every now and then I manage to drag myself out of bed and totally love it.

We also went to Lagos for a nice dinner (and ice cream!). Another culinary experience was a bratwurst at Cabo de São Vicente, which is apparently the “last bratwurst before America”, as it is the most southwestern point of Portugal. We also traipsed around Forte de São Luís de Almádena a bit on the way back from one of our surf sessions, which is really quite spectacular.

In the second week of the holiday, Paul had also booked a tennis camp in town. Turns out, he was the only one who had signed up, so he got private lessons from Portugal’s former champion (the funny thing is, last year, we had dinner at a restaurant in town that had lots of tennis pictures and tennis trophies on the wall, turns out, it was the instructor’s restaurant, although he had closed it because it was too difficult to balance tennis coaching and having a restaurant). Since we said we did like Portuguese food, he offered to take us out fishing one night and cook our catch on the barbecue. 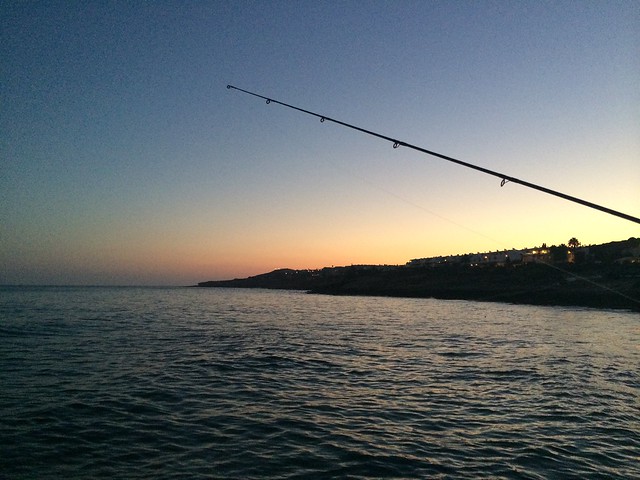 Unfortunately, the fish didn’t really want to bite, but luckily you can also get fish at the fish market, so we did have our barbecue, and our local cook/tennis instructor made sure the fish was perfectly cooked.

Life is good on the Algarve!

Is a Dutch researcher in Computational Linguistics and Semantic Web who besides her job loves surfing and cooking. View all posts by mariekevanerp